In 1941, based on a proposal made in 1935, the Government of Canada began requiring Inuit to wear tags stamped with unique identification numbers. The Inuit word for the system was ujamiit. In English, the tags themselves — leather coin-sized disks that many people have likened to “dog tags” — read “Eskimo Identification Canada.”

I learned about this program from Chelsea Vowel’s Indigenous Writes, a book I strongly recommend and will come back to. Then, as always seems to happen, I set out to learn more and fell down a rabbit hole. The three main questions I’ve tried to tackle, all yielding surprisingly complex answers, are: why was this system put in place, how did it come to an end, and what is its legacy?

A rose by any other government-issued ID number

The apparent need for the program arose from the inability of increasing numbers of white people (first Christian missionaries, then government officials and RCMP officers) to understand, pronounce, and spell Inuit names. And because Inuit didn’t have surnames, the names they did have also weren’t considered unique.

Better record keeping and identification systems were desired to help administer government programs. Canada issued ID tags stamped with unique codes, starting with a region code and then an individual ID number, and instructed the recipients that they were to keep the disks on their person at all times. The numbers were also used in official government correspondence instead of names.

The cultural disconnect went even deeper than pronunciation and a lack of surnames, though. What I think is most important to understand, and what I almost certainly do not fully understand, is the very different significance and use of names in Inuit cultures compared to the culture of European settlers to the south.

“The government never considered… the importance of a name to the Inuit,” writes Norma Dunning. Names, which were not gendered, were given to children by elders, “who usually chose the name of someone who had recently died.” A 2006 article in The Toronto Star says that more than being a simple ancestral tribute, this practice could represent “the transmigration of souls:”

If a person died, the next baby born might not only be named after the person but also be regarded as that person.

‘The reason for this is that it eases the feeling of bereavement of the lost one,’ says Louis Tapardjuk, a long-time authority on the subject and now Nunavut’s minister of culture, language, elders and youth.

Another commonly-cited quotation, attributed to an Inuk woman, makes this idea even more explicit: “No child is only a child. If I give my grandfather’s atiq [soul name] to my baby daughter, she is my grandfather. I will call her ataatassiaq, grandfather.”

Additionally, reported the Star, “Inuit often changed their name.  A hunter suffering a lean winter might change names for good luck, perhaps going through five or six in his lifetime. Or he might be known by different names to different people.”

Names are not only important, but meaningful. Dunning says that Inuit names “[explain] kinship ties and how that person is connected within a group.” That’s similar to the purpose of a surname in other cultures. It seems to me the problem wasn’t that Inuit names didn’t encode family connections and relationships, it’s that the government didn’t know how to decode that information, and didn’t try.

In the 1960s opposition to the disk system grew, and the federal and territorial governments felt pressure to reform it. The trigger incident happened in 1969, when “Simonie Michael, the first elected aboriginal Canadian, spoke at a council meeting of his frustration about the continued use of disc numbers by the Canadian government.” The government created Project Surname, which was well-named, in that it was a project to assign surnames, the lack of which had been cited as an original reason for the ID tags.

One man, Abe Okpik, was central to the plan. Ann Meekitjuk Hanson explains:

Abe Okpik, a respected Inuk from the western Arctic, headed the project. Between 1968 and 1970, Abe visited every Inuit home and asked the families to choose a name. The head of the family picked a surname — often a relative’s given name — and we were no longer known by numbers.

One of the things that made Abe Okpik well-suited for the task was his “understanding of the different [Inuit] dialects” in addition to English, which made it easier for him to communicate as he traveled “from community to community.” (I’m struck by how often in Canada’s history individuals have either been empowered by their ability to speak multiple languages, or felled by language barriers. That’s probably a future post.)

Okpik’s travels took him “over 72,420 km and [he] interviewed more than 12,000 people,” writes Michelle Filice for The Canadian Encyclopedia. A year later, once everyone had been assigned a surname, the government stopped issuing ID numbers.

My initial reaction upon learning about Canada implementing mandatory identification badges in the significant year of 1941 was in the neighbourhood of horror. And you don’t have to dig deep to find Inuit today who feel very negatively about the program. But that feeling is not universal. According to Okpik himself (via Dunning’s paper), when he started working on Project Surname some people asked him “why are you taking our number away? It worked for us all this time!”

In the examples I’ve found, some Inuit who were issued tags react with humour, not just laughing off the tags but laughing at the government that deemed them necessary. Others, especially younger generations, are less likely to think this is funny, and connect the tags to greater injustices like forced relocations, residential schools, and the sled dog slaughter.

One Inuk, Zebedee Nungak, remembers his identification number E9-1956 fondly. (Inuktitut Magazine, 88:2000, pages 33-37) He thinks the fact that white people (Qallunaat) felt the need to use numbers for their record keeping is comical, and that the IDs ended up being “a unique feature of our distinct identity as Inuit,” a fun source of pride. He wishes he knew more about the behind-the-scenes conversations that deemed the disks necessary in the first place, and that his own disk, which he lost in childhood, could be officially replaced. He calls it “a handy I.D. for all purposes.”

David Ruben told The Toronto Star that he thinks of his number as “an extension of myself as a person,” and that he “[sees] the lighter side of it.”

In an interview with Dunning, an elder named Minnie Aodla Freeman “does not seem angry about the system. She says practically and sympathetically that the Inuit did not mind the tags because it was explained that the government could not understand their names.” Dunning and Freeman also laugh at the idea that Qallunaat believed the tags were actually worn all the time: “they were only worn on the days when a boat was coming into harbour,” says Freeman.

Dunning is clear that not everyone was laughing at the time, though. John Arnalukjuak said that they were afraid of losing their disks, because the RCMP issued them and told them not to lose them: “the RCMP were really bossy and you know, so we feared them.” Rachel Uyarasuk said “I was afraid to lose mine.”

Olivia Ikey Duncan grew up after the tags had fallen out of use, but she told the CBC’s DNTO that once she learned of the history of the tags, she got one tattooed on her arm as a reminder of “what the government tried to do with my people.” 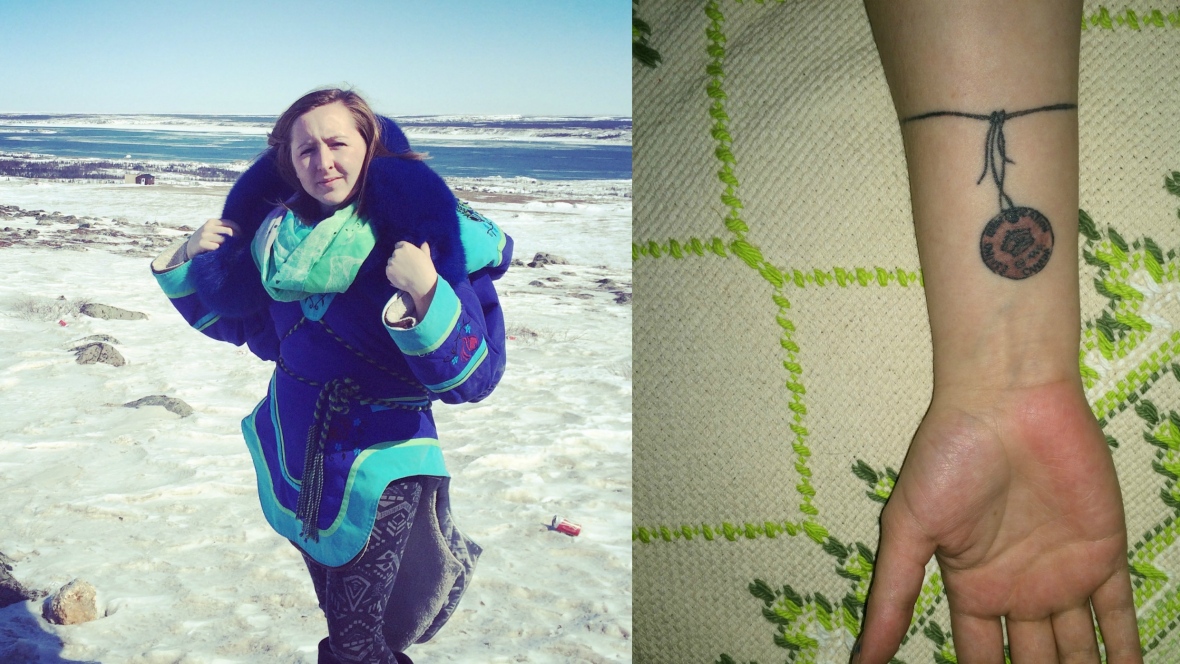 “I guess it was with good intentions… but they didn’t think of us as a people, as a culture, as the children, the elders, the community. They didn’t put us in their heads and in their hearts.” She says the tattoo helps her understand the “hurt” and “neglect” from that period.

Lucie Idlout wrote a song about the tags after hearing a report that “Canada was rated as one of the top countries in the world to live in.” She thought that was “a fucking joke considering how many treaties have been broken and how many Aboriginal peoples live in poverty.” (Dunning, 216) When Sheila Watt-Cloutier talks about her tag, she immediately starts listing other ways Inuit experienced loss of “our language and culture.” She says the tags are tied up in the “legacy” of all those things and need to be talked about.

The way the tags were phased out through Project Surname is also not without problems. It might be a mistake to read the reaction Opik recounted (“why are you taking our numbers away?”) as approval of the ID system instead of as an objection to surnames as yet another culturally-ignorant governmental intrusion. Again, this all started, in part, because surnames were not an Inuit tradition. “Again,” writes Dunning, “the Inuit were being forced to absorb a governmental practice that did not recognize or respect their cultural norms. Again, the Inuit had to submit to a change imposed by the Canadian government.”

Filice summarizes the criticism this way:

Some Inuit preferred the disk system to Project Surname, arguing that it was less disruptive to identity traditions and less intrusive than other bureaucratic interventions. Most Inuit had accepted their disk numbers, and some had even become emotionally attached to them…. Some also criticized Okpik for speaking mostly to men and for using men’s names as their family’s new surname. This became a source of distress for women who came home to find their identity overturned and reassigned.

Dunning points out that Social Insurance Numbers were being rolled out to whites in the North West Territories around the same time as Project Surname. “Why not issue a social insurance number to the Inuit in replacement of their disk numbers and leave their names alone entirely?” (Notable differences between Eskimo Identification tags and Social Insurance Numbers include that the latter do not replace names entirely, and are of course not required to be worn.)

It’s been decades since ID tags were issued, but, in a Vice report, Duncan, the Woman With the Eskimo Identification Tattoo, describes an eerie practice that persisted to a new generation:

‘Growing up, all Inuit kids picked a number for themselves, like a lucky number, it was just a normal thing,’ says Olivia. ‘We signed everything with our numbers, I was number 8…my brother was 11. I guess it just kind of transferred over, weirdly, to this day.’

The same Vice report points out that the Government of Canada has never apologized for or directly addressed this program since it ended.