Because my current interest in history began with the American Revolution, one of the first questions I asked was: why didn’t Canadians fight for independence like Americans did? One answer is that they did. Violent rebellions in present day Ontario and Quebec happened within living memory of and were influenced by the American Revolution and, while they were not on the scale of the Revolutionary War, they did contribute to Britain loosening its grip on its remaining North American colonies.

I’d heard of those Upper and Lower Canada Rebellions, but not of the so-called Patriot War that immediately followed. This year-long war, explains Shaun J. McLaughlin in The Patriot War Along the New York-Canada Boarder, was “a historical oddity,” an “undeclared war between the United States and the Canadian colonies.” What makes it odd is that it was “not a war between nations,” but rather a war fought between an alliance of likeminded Canadians and Americans against the combined might of the British and American militaries and Canadian militiamen.

The pivotal event between the Rebellions and the Patriot War was the declaration of a Republic of Canada by William Lyon Mackenzie. As you may know, Mackenzie is most famous for leading a rebel assault against Toronto, the city of which he had recently been mayor. What’s less well-known is what he did next.

Having lost the battle but not yet the war, Mackenzie and other rebels fled to the United States. There, the “fiery and accomplished orator” rallied Americans to his cause of a free Canada, comparing “the suffering of Canadians to the ‘same evils’ that had caused” the American Revolution.

On December 14th, 1837, Mackenzie and other “Patriots” invaded Canada with 24 men and two cannons. Well, kinda. The invasion involved the occupation of the small Navy Island in the Niagara River, technically on the Canadian side. Still, Mackenzie proclaimed a “Republic of Canada,” a kind of government in exile, and the bold move attracted more people to the island. 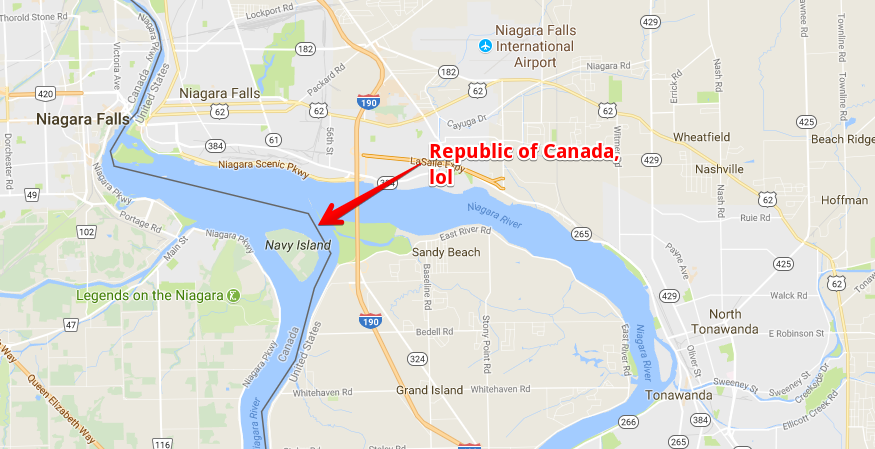 “At its peak,” writes McLaughlin, “the island’s Patriot force numbered approximately six hundred, almost equally Canadian and American.” Their artillery also increased to twenty-four cannons, which they used to bombard the Canadian mainland.

Loyal Canadians were unamused by said bombardment. Just two weeks after the beginning of the Patriot occupation, sixty Upper Canadian militiamen “rowed across the icy river in darkness” to seize and set aflame the rebels’ supply ship. In a scene worthy of HBO, “the blazing craft grounded on rocks and broke apart, its pieces plummeting over the falls.” The short-lived Navy Island occupation fizzled out two weeks later, in part, says McLaughlin, because the rebels were bored and cold.

One detail prevented the Republic of Canada’s demise from being a tidy victory for Upper Canada. The supply ship the militia destroyed — the Caroline — was American, and an American soldier was killed in the process. So, that was a whole thing. Americans were outraged, and “sent money and ammunition to Mackenzie. American volunteers soon outnumbered Canadians in the Patriot army.”

Thus, “a bungled revolt near Toronto” evolved “into a yearlong undeclared border war” between Canadian rebels and American would-be liberators on one side, and the British and American militaries and loyal Canadian militia on the other.

Read the next post in this series, The Battle of the Windmill.

Featured image: a contemporary painting of the destruction of the Caroline by George Tattersall.

3 thoughts on “The Republic of Canada”